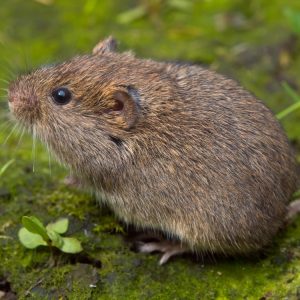 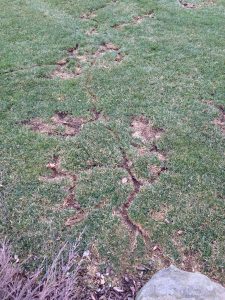 Voles, also called meadow mice and meadow voles, are small, stocky rodents, which can reach up to seven inches long at maturity. Adults are chestnut brown, mixed with black on the back, dark grey underparts, and brown feet. Voles are mostly vegetarian, feeding on a variety of grasses, herbaceous plants, and tubers. They can damage trees and shrubs in the fall and winter when they gnaw off tender bark and roots. If this gnawing girdles the tree, also known as ring-barking, were the complete removal of a strip of bark around the entire circumference of the trunk or branch can and will result in death in the above area over time.

Voles live in small colonies from a few to many. They mainly live in grass meadows where they build distinctive runways which crisscross the area (See Pic Above). Usually grass cutting can be found in these runways. They also dig underground burrows where they construct food and nesting chambers. Voles do not hibernate and are active throughout the winter season.

During the winter in snow covered areas such as ours, the voles make runways beneath the snow and feed on the snow flattened grasses. They also burrow up through the snow to reach grass seed heads. Immediately after the snow melts, their runways often become visible on the ground. Other garden damage that occurs under snow cover often escapes notice until it is too late.

Voles cause damage by feeding on a wide range of garden plants. Do not confuse vole damage with damage by rabbits, which includes stems clipped at a smooth 45 degree angel and wider gnaw marks. Stems browsed by deer usually have a rough jagged edge. Voles damage to trees and shrubs is characterized by girdling and patches of irregular patterns of gnaw marks about 1/16 to 1/8 inch wide. Gnawed stems may have a pointed tip.

Control Methods: Damage to lawns can be reduced by mowing close in the fall before snow arrives. Also remove all tall grassy cover near lawns. To repair damage to lawns from runway construction, rake, fertilize and water affected area.

Trapping: Use mouse traps or cat traps to remove small populations of voles. Place traps perpendicular to runways with the trigger end in the runway and bait with small amounts of rolled oats and peanut butter. Set traps in the fall before most of the damage occurs. May need to repeat after Winter snow melts before Spring.

Fumigants & Repellents: If you are considering using one of these methods please check with your local gardening center or local retail store. Please read all directions and follow the instructions precisely before use. You may also reach out to your local Pest Control for assistance.